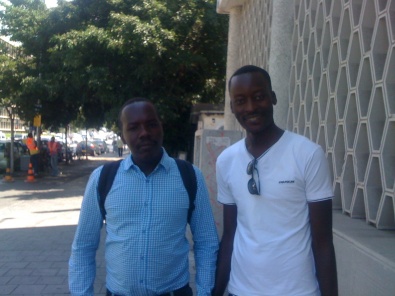 Mutasim Ali, right, and Anwar Suleiman, came to Tel Aviv from Holot for a press conference on the new Human Rights Watch report

On Tuesday, Human Rights Watch released a report about Israel’s policy (or lack of it) regarding Eritrean and Sudanese asylum seekers. The highly critical report is entitled: “Make Their Lives Miserable”: Israel’s Coercion of Eritrean and Sudanese Asylum Seekers to Leave Israel” (“Make Their Lives Miserable,” by the way, is a direct quote from former Israeli Interior Minister Eli Yishai on the subject). In HRW’s own words:

This 83-page report documents how Israel’s convoluted legal rules thwart Eritrean and Sudanese asylum seekers’ attempts to secure protection under Israeli and international law. Israeli authorities have labelled Eritreans and Sudanese a “threat”, branded them “infiltrators,” denied them access to fair and efficient asylum procedures, and used the resulting insecure legal status as a pretext to unlawfully detain or threaten to detain them indefinitely, coercing thousands into leaving.

According to HRW, Israel unlawfully coerced almost 7,000 Eritrean and Sudanese nationals into going back to their home countries, where they are at risk of serious abuse. In the eight years since since asylum seekers from these countries first began arriving here in large numbers, “Israel has applied coercive measures to ‘make their lives miserable,’ HRW says. These include indefinite detention at places like the Holot detention facility in the Negev desert, which the state opened in December. The group spoke with seven Sudanese who went back to Sudan; all were detained in Khartoum, one was tortured and one placed in solitary confinement. In the words of the report’s author, Gerry Simpson:

“Destroying people’s hope of protection by forcing them into a corner and then claiming they are voluntarily leaving Israel is transparently abusive. Eritreans and Sudanese in Israel are left with the choice of living in fear of spending the rest of their days locked up in desert detention centers or risk detention and abuse back home.”

Granted, this isn’t the first time that Israel has been slammed on this issue. Israel’s treatment of Eritreans and Sudanese – who make up more than 90 percent of the around 50,000 asylum seekers in the country – and its asylum-seeker policy in general, have come under fire from the UN, rights groups and asylum seekers themselves. A State Comptroller’s report earlier this year also slammed state policy. But still, the 7,000 figure is an updated one (it has never been reported to be this high before), there are few available testimonies from Sudanese who have returned to Sudan and, you would think that what a major international rights watchdog has to say on the issue would be of interest.

The fact that no media outlets turned up at a press conference to launch the report on Tuesday morning might indicate otherwise, however. Simpson had flown in to Israel especially for a two-day visit to discuss the findings. Around twenty minutes after the presser was set to start, he walked around the mostly empty hall, asking people if they were journalists, shocked that no one was. I’m a journalist, I told him, feeling somewhat uncomfortable because I wasn’t there to cover the event, but just out of interest in the topic. The audience of around 20 people were only UN staffers, other staff from organizations working with asylum seekers and refugees, and also asylum seekers and refugees themselves.

We waited. People stood around, talking and drinking out of plastic cups by a long table laden with beverages and pastries at the side of the room. The bottles of drink, the tea, coffee, and pastries stayed mostly where they were. The piles of printouts of the report summary and recommendations remained in their piles. One Human Rights Watch staffer told me they had sent out the invitations to plenty of outlets in the Israeli media, to foreign outlets with reporters in Israel and to the wires. He had never seen anything like this before, he said.

So why the no show? Did HRW not do a good enough job of advertising the press conference? Journalism is a busy business, maybe most people just prefer to stick to the press release. Is it because HRW is distrusted in Israel because of past criticism? Maybe the Israeli public, with two months of Gaza war behind them, just isn’t interested in what’s happening to asylum seekers here – maybe this just isn’t enough of a story.

In the end, HRW didn’t present the report. People began to make their exits out of the sunny hall, and somebody from the organization collected the pastries so they wouldn’t go to waste. After the 11:01 A.M. press embargo, a number of local and international news sites published articles on the report. 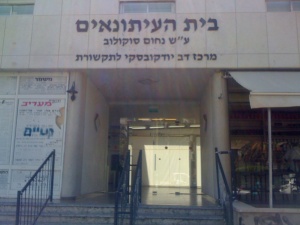 The presser was set to take place at Beit Sokolov, where the Israel Journalist Association is based.

But for those asylum seekers and refugees who turned up on Tuesday morning, the message was that no one really cares. Two men currently detained in the Holot detention center came all the way to Tel Aviv from the Negev desert facility to attend. One of them was Mutasim Ali. The Darfurian, a symbol of the refugee protest movement, was running the African Refugee Development Center in Tel Aviv when he was ordered to report to Holot in May, and his case was widely covered by the press. “I came especially, because I think it is so important,” he said, and the fact that no one showed up reflects the disheartening truth that his story, and those of others like him, isn’t of great concern.

Read the full Human Rights Watch report here; for background on the issue, take a look at my World Refugee Day reports from earlier this year here and here.