Sex, sex, sex or why I think some Saudia Arabians started visiting this blog

Anyone who has a blog knows it. It is that private ritual that can lift your spirits like no other, only to leave you empty, longing for more like an addict after the short-lived high has dissipated. I am talking, of course, about visitor traffic statistics, and the endless, repetitive joy of consulting them.

I work in online news (here, by the way), so I know about watching traffic rise and fall and trying to entice readers with intriguing headlines and smart SEO. When it comes to my blog though, getting those clicks is something else – a sense of personal satisfaction mixed with the warm, fuzzy feeling of a light endorphin rush.

And so it goes that some time ago I noticed a new trend in my blog statistics: visitors from Saudi Arabia. At first, being based in Israel and Saudi Arabia being a country I may never be able to visit, the trend put a smile on my face, but I thought nothing of it. It is not unusual to see clicks from the wider world, usually the result of someone taking the wrong turn on their Google search to somewhere. This wasn’t a one-off, though; these Saudi Arabian clicks kept returning.

What they seemed to be clicking on was a post I had written about the Gulf kingdom. It was in October last year, when I was reporting about the ultra-Orthodox Jew gender-based on-flight seat-switching saga (click here if you want to know what that’s all about). Researching that, I started wondering what happens on flights in Saudi Arabia. I wondered about it, and then I blogged about it, and then people at Saudi Arabian IP addresses were clicking on it, and they were getting to the post via web searches. Could it be that they were really interested in reading about this topic, in my post about their country?

At first, I could only guess why they were ending up on my blog. Some search engines don’t reveal the terms people use for reasons of privacy. I knew that some visitors were getting to the post after searching for things like “saudi arabia airline segregation” or “sex segregation on airlines” but overwhelmingly, search terms come up as “unknown” in my statistics. Plus, my WordPress statistics doesn’t tell you which search term was Googled in which country. 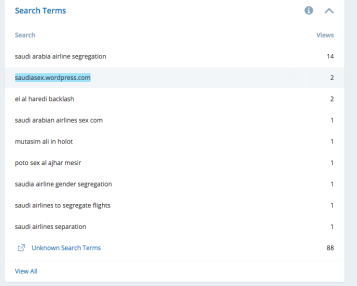 The post became one of my most clicked, and Saudi Arabians became some of my most frequent visitors. With every day that the trend continued, the idea that people from this country so near and yet so far were virtually visiting my little corner of the internet began to fill my imagination. This was it! This was coexistence! The crossing of regional boundaries, an Israeli reaching out to people in an enemy country. This was one of the small connections that could one day bring peace in the Middle East!

Last month, however, an unencrypted search term shed light on what may be the real reason that people in the Gulf have found their way to my blog. The search term in question, highlighted in the picture above, was “Saudiasex.wordpress.com.” Does this have something to do with gender segregation on Saudi Arabian airlines, I wondered, somewhat naively, as I copy-pasted the address into my browser and clicked. As the screen loaded, the blog slowly revealed itself: Arabic I didn’t understand and a grainy photograph of a woman doing something that has nothing to do with gender segregation on airlines.  A penny dropped:  Some of these Saudi Arabians were looking for porn.

True to form today, by the way, my statistics screen map shows one country highlighted. It is Saudi Arabia. Two people clicked on my gender segregation on Saudi airlines post, and got there through an unknown search term. I can only imagine their disappointment when they clicked on it.

Still, even though this is what the statistics seem to indicate, Saudi Arabians visitors, you know best why you ended up on my blog. If you somehow make it to this post and get this message, let me know in the comments…